If I’m honest, this story starts back in 2009. That was the year that I rode 12,500 miles on my BMW F800GS from Cape Cod, Massachusetts to Alaska and back. That was when I first learned about the Pan American Highway. Somewhere north of the Arctic Circle we ran in to a wiry German fellow on a bicycle, who was making the last push north and finishing his year-long journey on bicycle from Tierra del Fuego, Argentina all the way up. That was it. It didn’t take long for my wanderlust dreaming to set in. Sure, I’ve been on a lot of adventures since then. But I’ve kept dreaming that one day I’d finish the Pan American Highway and head south this time.

Then comes Steven. Little did he know what he was getting himself in to! When I met Steven he was ready. He was dreaming. Perhaps not of South America, but he was looking for an adventure. And he just needed that little push. He just needed someone to tell him it’s okay to think outside the box, to dream big. I learned a while ago that I don’t have to be the person that thinks, “dang, I wish I could do that.” I can be the person that does it. And so, I was happy to share my wanderlust with him.

So we started dreaming together. It started with thinking about things that we could do together on the road to make it possible to support ourselves while traveling long term. I’m blessed that I can work remotely as long as internet is available. But he couldn’t necessarily help me with that stuff along the way. And he had a full time job. And then it happened. I discovered 360 video production. And I knew it was going to be big. So I pitched one of my clients with the idea to start building a 360 video library. Long story short, we are currently en route to Santa Barbara, CA to start filming on Friday.

This isn’t something I could do all by myself and so Steven, seeing the potential in this, jumped aboard. Now we are partnering on this project. It starts with California’s Central Coast but we are hoping that we’ll be able to pick up some additional gigs.

A TON of work followed that decision. Both from a production standpoint, getting equipment ready and up to speed, but also in terms of getting us ready to hit the road. Because if we were going to do this, we were going to do it. And so we’ve set off. We’ve rented the house out, packed up everything we’ll need indefinitely and hit the road in a 1991 Ford Econoline E350 Club Wagon that we’ve affectionately named “Chetty”. As in Chester. Or Chester P. Storch – my grandfather. Because, well, it fit. It just came to me within 5 minutes of handing over a wad of cash for the purchase. And I knew it would be right and that he’d take good care of us. We’ve made some modifications to Chetty. He was once a church van. Then an antique shopping rig and now, he’s a awesome camper van.We’ll share more about his transformation via video very soon!

Also, we’ve launched WanderBird Productions. It’s the evolution of my SN Creative company and we are looking to focus on more of the video production and 360 content. So how does this all tie in to South America? Well, there’s no official plan. We are going to make the most of the 360 gig and look for other opportunities while in California. We’ll go where the wind takes us. And at the right moment we’ll head south and finish that dang highway!

We are full time van vagabonds with our 3 rescue dogs, Aasa (German Shepherd), Peanut (Chihuahua) and Jug (Chocolate Lab) in tow! I’m so excited to share a bit of the journey with you! 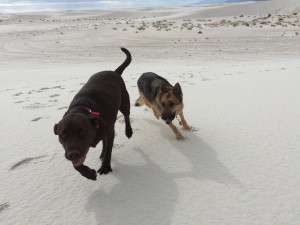 Inca Trail Reverie“….And Other Such Adventures”