I can’t be sure exactly where the idea for the documentary came from. All I know is that before I knew it, what had begun as a seemingly ridiculous inkling in the back of my mind had taken shape into a notion and a hope. Perhaps more than a year ago a friend asked me if I’d be willing to help a small organization doing water projects with the design of a logo. Sure, I agreed, eager to help but also always enjoying a new project. After that logo and a Facebook connection with For One Another Foundation I began being inspired by the work the organization was doing. I was hearing more about the water crisis and I was excited to learn about what this small organization was doing to help.

But the seed in my mind for the documentary begins really at a point where my dream to create something that that was meaningful in some way, and inspiration for the topic, intersected. I suppose it’s a natural place, as one surely cannot create something that evokes feeling if you don’t feel inspired yourself. And so, only somewhat hoping that James would talk me off this crazy ledge, I told him of my barely-there harebrained scheme. For some reason, and I’m still not sure I deserve this, my husband believes in me and instead of naysaying simply said, “If you want to do it, go for it.” What a notion! And why not?

And so, after a whirlwind of events that I’m still shaking my head at, I found myself launching head first into the unknown. The more I convinced myself that I was actually going to do this, the more heavy the burden of the message and responsibility to do it right weighed on me. And lets be honest, a heavy dose of “Oh God, please don’t let me fail!” pleas were offered. It occurred to me that the plea carried a heavy dose of negativity and self-doubt and changed my chants to “I think I can, I think I can, I think I can.”

Carrie Beth, Executive Director of For One Another, by some providence also found validity in the idea (I’m certain it had nothing to do with my oral persuasions, filled with “you know”, “like” and “ums”) and she invited me to join the upcoming Uganda trip. It was perfect! If I was going to do this, Uganda was surely the best place to show the lack of safe drinking water. There was only the minor detail of me moving to Alaska at just about that same time to contend with. Convinced that if you wait for the perfect time for something it may never happen (note to self – this applies to childbearing as well) I decided to suck it up and just deal with the crazy schedule and make it happen.

The logistics of such an endeavor are more than you might think but I’ll spare you the details. However, after launching into an impassioned plea to a camera operator in hopes that he’d donate his time to the project I was surprised when he interrupted me before finishing my sermon and said he’d do it. And so it became myself and the camera operator following Carrie Beth and two other volunteers on this journey to Uganda.

July 31st we set out from Sacramento, all of us traveling together. I made the mistake of beginning the journey already sleep deprived which made the 30+ hours of flying rough. Once on the ground in Entebbe we drove to Kampala to stay the night. After about 4 hours of sleep (even that was welcome), we were welcomed by the first member of MAP International to help us along our way. We launched off for a drive through Kampala traffic, and our first glimpse of Uganda in daylight, to collect our sand dam engineer, Livingston. Kampala seemed dreary with smog from the hotel room, but at street level it was a bustle of activity. Every sort of ware, from bananas to mattresses were being ferried along the dirt streets on people’s heads. Motorcycles squirted though seemingly impossible holes in traffic. After sitting in a stifling van at a stand still for about an hour the endeavor was given up and we turned around and waited a whole 5 minutes for Livingston to meet us at a gas station. Armed with our engineer we began making our way to Gulu – a 6 hour+ drive. 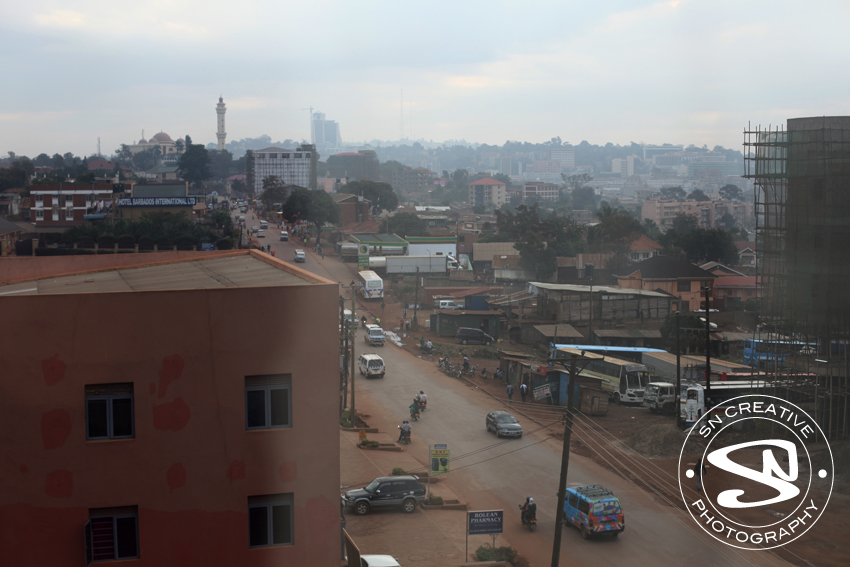 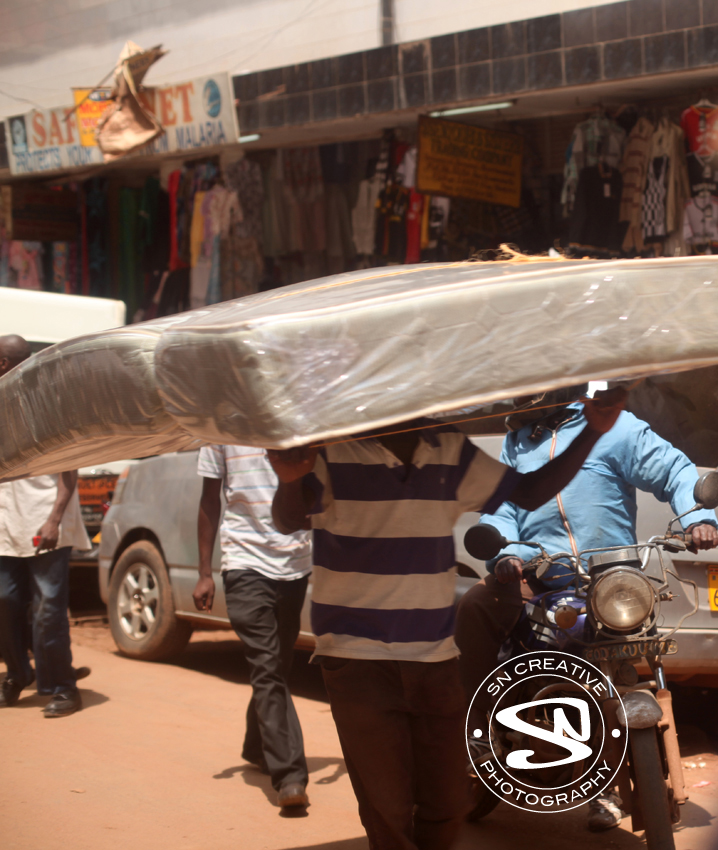 Carrying all sorts of things through Kampala 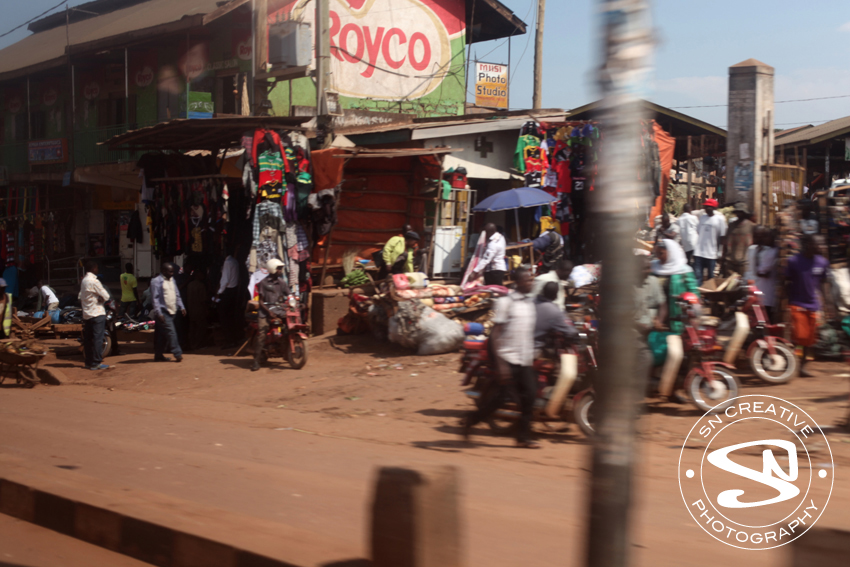 In Uganda, roadside fair for road trips takes the form of roasted bananas and corn sold from little hibachi grills, surely covered in dust, along the side of the road. Simply pull the vehicle over and within seconds you are enveloped in a array of offerings – meats on a stick, suspicious looking bottled water, watermelons, baby plantains and more. After seeing raw meat strung up in open-aired huts along the street our American stomachs (or sensitivities) made us reluctant toward the meat sticks and we opted to try the roasted bananas. They smelled like warmed banana bread, but were less sweet and much dryer than what was imagined from what the smells evoked. But they were good – and I was eating Ugandan street food. Somehow this seemed essential to the experience. 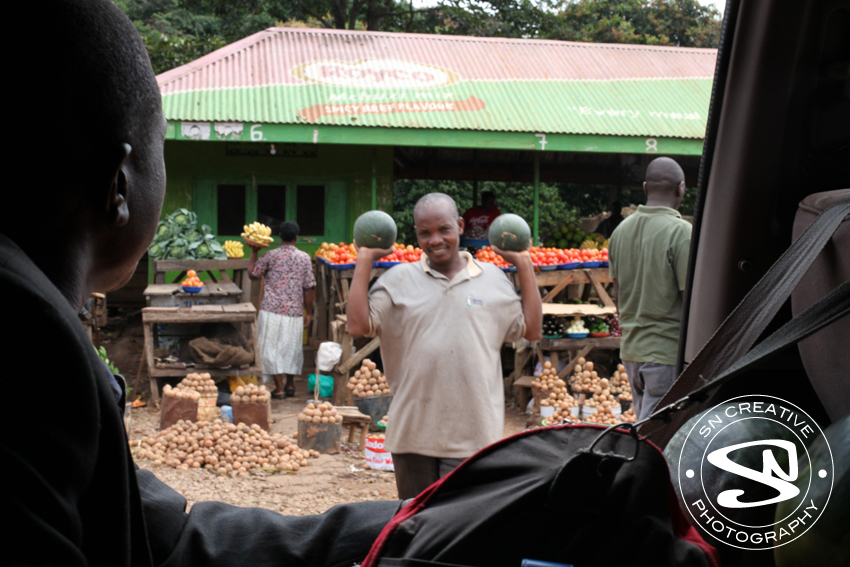 We arrived in Gulu just in time to meet the local rotary club (a connection sure to be helpful for the foundation) for dinner at the hotel we’d be staying. Food, I learned quickly, takes an enormous amount of time to arrive there. And while we had all ordered vegetarian dishes, the duration of the wait plunged me into images of the slaughtering and de-feathering of chickens and collecting of rice from the fields just on our behalf – and a bad mood. We were in such a rut with exhaustion by the time dinner came it was all we (or perhaps just I) could do to plaster a smile, no, prevent a downright scowl from hanging our our faces. Mercifully, at some point the dinner concluded and we were allowed to retire to our rooms and bed.

The next day was to be filled with a visit to the SOS orphanage in Gulu before taking off for the town of Kotido where we’d be staying for the duration of the work in the Karamojo region. We had two large duffle bags of donations from the states to deliver to the orphanage. We were invited in at the gate and led to one of the small houses on the premises that was home to about 8 or 9 children (just a few of the many there). The house mother asked each of the children in her care to stand and declare their name, age and what they wanted to be when they grow up. Some proudly proclaimed doctors, farmers and drivers (a noble profession as I’d later discover), while others were barely audible in their shyness. Somewhat disappointed that we couldn’t really participate in the distribution of the items we’d hauled half way across the world, we were still pleased to meet the beautiful, polite children and left with the confidence that the articles left behind would find good homes there.

But surely, it was time to start our travel to Kotido before it would get dark. If the roads from Kampala to Gulu were a little rough around the edges, the road to Kotido promised to be an adventure in and of itself. It did not disappoint. Thankfully, in Gulu we met our first of the two MAP drivers, Joseph, who would be driving us in one of Map’s Land Cruisers – a much worthier vehicle than the van we started from Kampala in. Luggage and equipment strapped to the roof rack and covered with a tarp (rainy season in Uganda), we were off. Our sense of adventure wasn’t misplaced as we found ourselves stuck at the back of a long line of vehicles stopped along the road trying to figure out just what to do about the flooded, swift-moving river crossing ahead. We all piled out. Local village children plucked their way along the line of vehicles, just being curious at all the hubbub. I found them willing subjects, and while the camera operator was at the front of the car line filming what was surely an animated discussion of the merits and risks involved in fording the river, I had the pleasure of entertaining some of these little ones with my strange camera and entreating them to jump or wave in unison. After successfully getting them to wave at the camera for me, I happily showed them the result of their efforts on my little screen – only to be further delighted by them waving back to themselves waving on the screen. 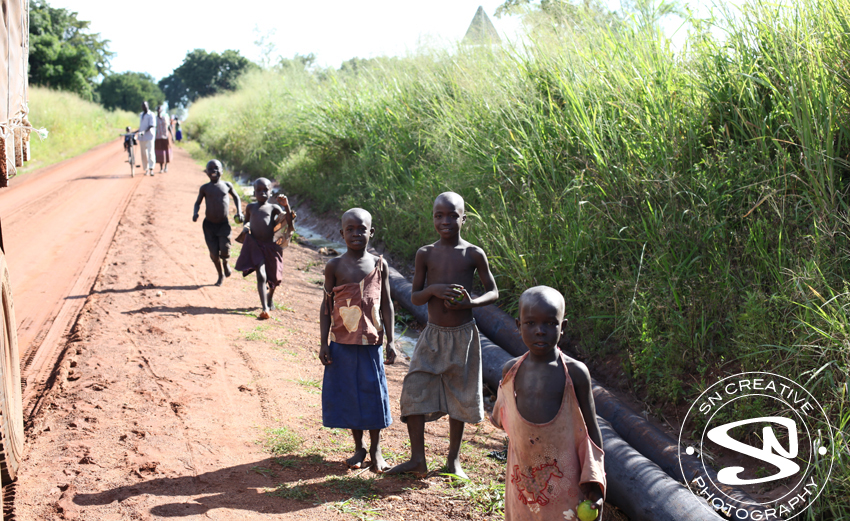 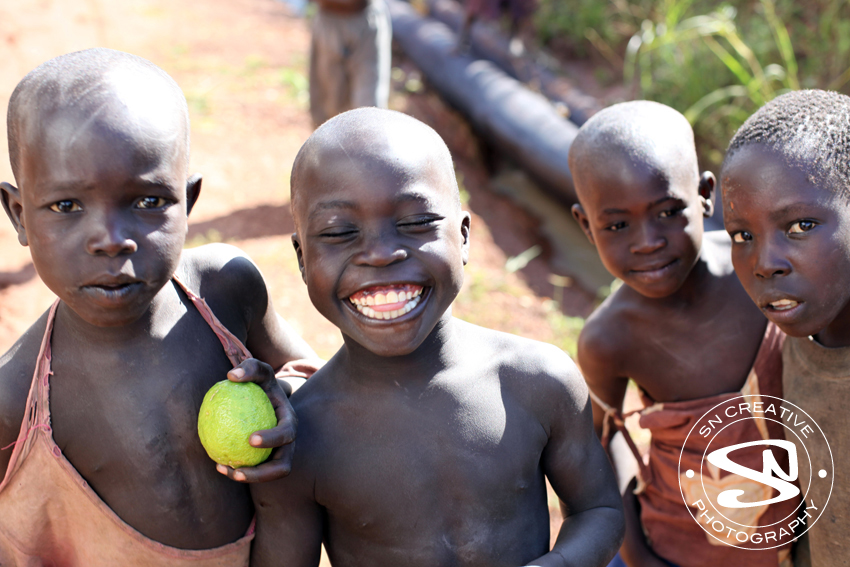 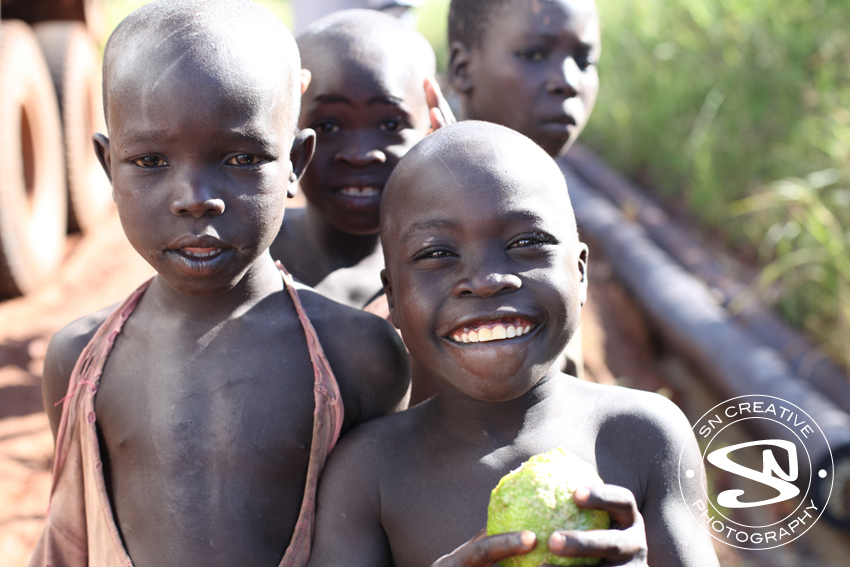 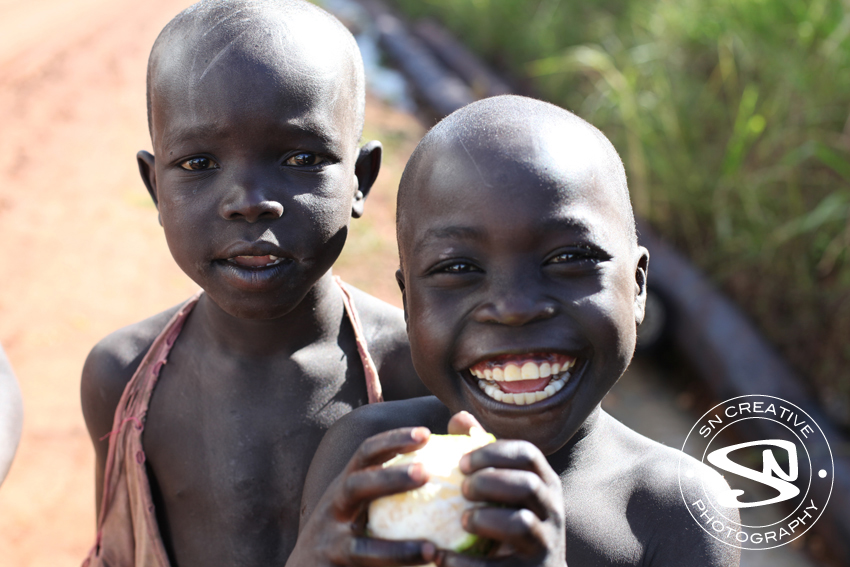 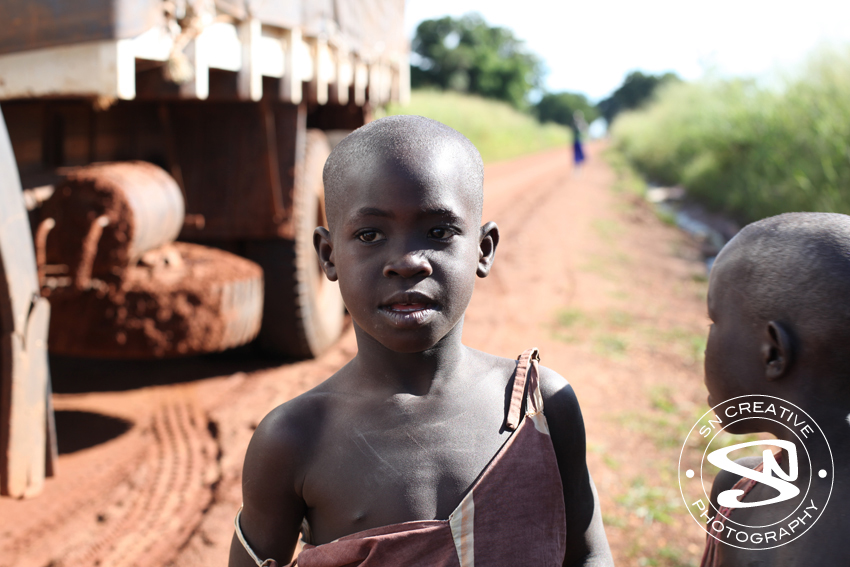 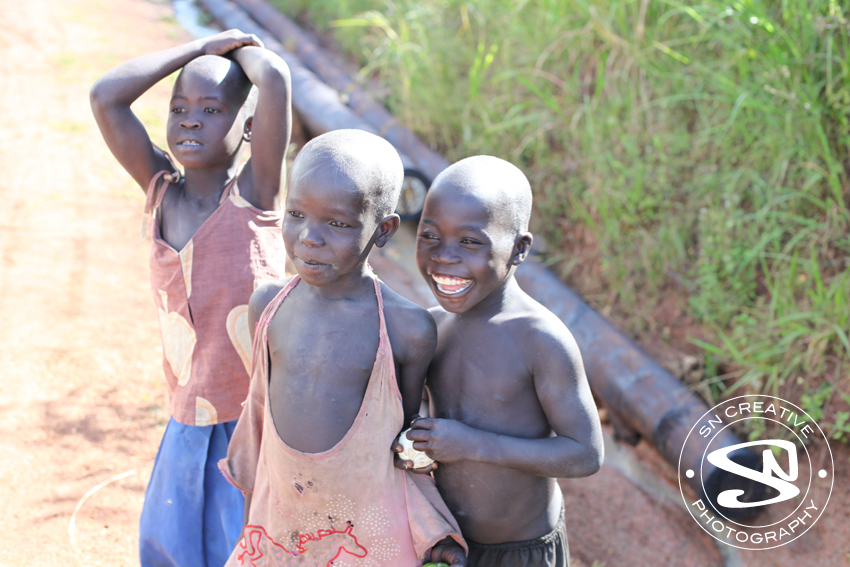 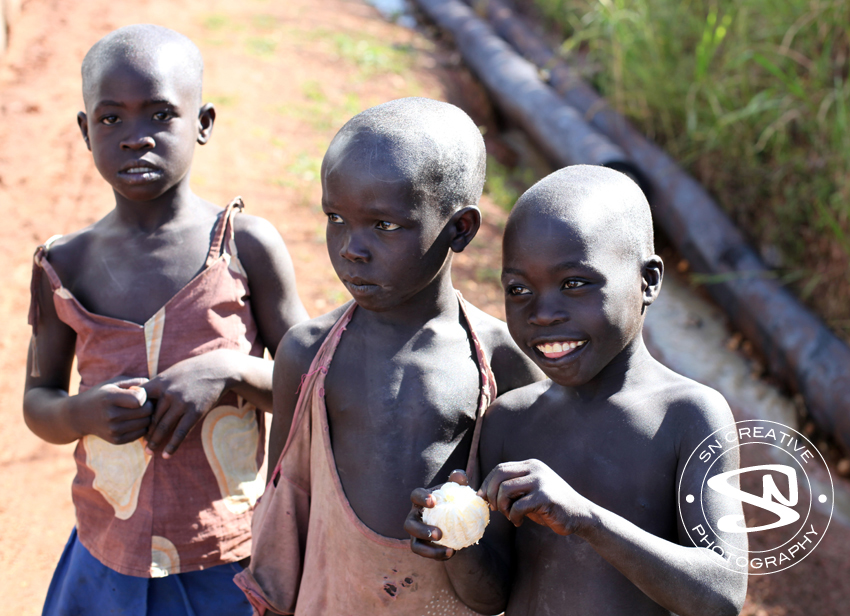 The decision was made to cross the river. All ten of us (did I mention 10?) piled back in to the Land Cruiser. Feelings were mixed. Michael the cameraman was giddy with excitement about the shot possibilities and quickly mounted the GoPro onto the hood of the truck. Carrie Beth on the other hand, being in the middle, was concerned that if we got swept away she’d be stuck and drowned. I was quickly assessing egress routes. With a dramatic plunge we hit the water which quickly almost reached the windows. We were making good progress, but about mid-way through the driver missed a gear and I held my breath and awaited a dreaded stall, watching how quickly the water was moving around us. Thankfully he found it again quickly and we emerged at the other side in a roar of cheers and hollers. The rest of the journey to Kotido was uneventful but tiring and we arrived late and exhausted.