Mr. Devidas and an arrival committee of several collected us upon our arrival by bus from Mumbai. At the orphanage, the fanfare of drums and cymbals and 30 boys greeted us all at once. A beautifully intricate welcome sign of various colored sands decorated the floor. Strands of marigolds around our necks and red powder on our foreheads added to the honored welcome. This I was not expecting.

We were promptly invited to sit and be introduced to the group, piping hot cups of chai tea quickly served. The rest of the evening consisted of a tour of the orphanage, more introductions and show and tell. Our accommodations were in the computer lab room, Brent, Marie and I sharing a palette on the floor – modest to be sure, but their very best at the same time. We’d be sharing the bathroom with the boys and the staff.

“Didi, photo! Didi, photo!” the boys entreat again and again in chorus. “Didi” I’m told means “big sister” (or there about) and that’s what I’m called here. I know it’s a common enough thing, but to me it feels like a term of endearment. The boys are eager for everything. Eager to have their photo taken, eager to see it. Eager to take photos themselves and eager to show their unique talents. Eager for attention and someone to listen. They ask all sorts of questions. Is this pen from the America? Have you seen the statue of liberty? They crowd around my phone and devour pictures of America. Is this your house? Your dog? Do you swim in that water? No, see the ice… it’s too cold. Do you have a car? Can you sing an American song?

It’s overwhelming, the constant calls for your attention and not knowing who to respond to first, or even how to respond. After a while I start to get a headache but the little ones of the group entreat me to sing the cup song again and again. Every interaction is physically draining, but my heart is full.

I watched them this morning as they prepared for the day with their yoga practice. I listened to their earnest Ohms and Rahms and watched as they worked out their sun namaste, trying to figure out where to put which limb in the mass of little feet and hands, thirty pairs of each all squeezed into one small room.

They introduced me to their orphanage dog, Sonoh, a well fed but ragamuffin looking fellow that sees to security around these parts.

They saw us off to bed last night and seemed to love the phrase “see you tomorrow” and repeated it back me in their best American accents.

They are eager to see to our needs, but privacy is surely a foreign concept to thirty boys sharing two rooms and they overstep in the most innocent of ways. Last night Marie and I were waiting for them to go to bed to use the restroom so that we could do so without notice. We waited as long as we could, and thinking it had quieted down enough tried to sneak down. No sooner had we entered the bathroom there was a party of three at the entrance, one asking, “Everything okay here?” We shooed them away with promises that all was well and once I’d entered the latrine and closed the door, slight annoyance gave way to humor and I had a good chuckle at the comedy of it.

The next day the boys gathered in the main room. They beamed as those that were top of their class stood to be recognized. They all went around the room sharing what they want to be when they grow up. Army men (a much revered profession and somewhat competitive to get in to here), software engineer, artist, doctor, police, and the list went on. Each one was given a turn to show off their talents. Several group dance routines and songs were performed and one of the older boys rapped for us. Some of them that were artists and ran to their rooms to grab pictures they’d drawn and proudly shared them. It’s somewhat magical to see these young boys that were brought from the streets be encouraged to have dreams and hopes and given the means to achieve them.

After three days with them it was time to go. “We will miss you when you leave Didi.” And there stays a little bit of my heart. 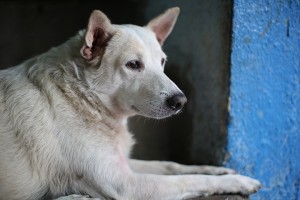 A Water Filter Won’t Change the WorldTrout- A Memory