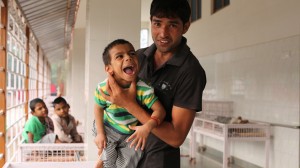 The decision to go to India was not one I made easily. I had all these questions: What’s my motivation? What will I REALLY be doing there? Does it even make a difference? Am I really wanting to go for selfish reasons? Am I contributing to the controversy about white people and “voluntourism”? But mostly, what could I possibly hope to accomplish? After closely inspecting my motives I honestly concluded that they were not entirely altruistic. Indeed, whether volunteering locally or half way around the world, I get something out of it. It relieves a bit of the burden I feel. And so, concluding that my motives could even be deemed selfish, I almost decided NOT to go to India. But then it occurred to me: If the people that have a burden don’t do something, then who will?

In terms of life views, I think I fall somewhere in between realism and optimism. You won’t find me cheerfully singing “Always look at the bright side of life” while bleeding out, but I do believe that attitude and outlook make a huge difference. While it might not necessarily change the circumstances, it will most certainly change your experience of them and the kind of person you become through them.

I truly believe that every life you touch matters, no matter how small the way. That living generously through your actions and deeds, no matter where you are or what the circumstance, matters. But I have to say, when you are in places in the world where the need is so great, and everywhere you look there are people in desperation, it’s really hard to see how anything can help. It’s hard to fight the creeping blackness that sneaks up behind you and tells you, “None of this matters. You can’t possibly make a difference. The problems here are too big. What ARE the issues here? You don’t even understand….. how could you possibly help.”

If you look at these matters at a macro level, that dialogue would be correct. Taking a suitcase of water filters to India isn’t going to fix any of the issues there. But if you look at the situation through the lens that every life matters, then the story is very different. The story then becomes about changing one life. Or the life of one family. Or even just providing relief for someone’s suffering.

One water filter may not fix anything. But it may allow some children to make it to age five. And it may allow a child to go to school because he’s not sick all the time. And if that child goes to school and gets educated, then perhaps he can advocate for his community and work toward long-term solutions for them. But if that child is sick and dying because he doesn’t have access to clean drinking water, there’s no way any of the other stuff might follow. And just what if?

Let’s put it this way and look at it from a local perspective. If you decide to volunteer to cook food at the homeless shelter, are you under the illusion that feeding those people is going to solve homelessness? I think not. But does that mean that you shouldn’t volunteer to help feed them a warm meal? Doesn’t that warm meal matter? Even if it doesn’t solve the larger problem?

I’ve received positive feedback from people about going to India. Even praise, for which I’m sure I’m not worthy of because having seen the people there doing the real work, I fall very short. But I have a sneaky suspicion there are some out there, even friends, that might be thinking, “Oh look at Miss Bleeding Heart…. thinking she’s going to change the world…..” And you have every right to be skeptical. But let me be clear – I’m under no illusion that I’ve done any such thing.

So you’re right. A water filter won’t change the world. But it might just change the world for one person. At worst, seeking to relieve someone’s suffering, encouraging a child, or giving of yourself and sharing in their human experience, is worth something. If to no one else, you and that person. And no, you don’t have to go half way across the world to do it. Matter of fact, there’s a lot you can do and never go anywhere.

So I say all that to say, THAT is the story I keep telling myself, in spite of the overwhelming inadequacy of anything I could possibly do. And that’s where the realist and the optimist in me meet. And since I shared part of the journey, I thought I’d share some of what goes on in my head about it.

So which story to you believe?

“….And Other Such Adventures”“Didi Photo! Didi Photo!”